The last thing a homeowner wants in these modern times is to learn that their home or property is infested with insects, especially one called stink bugs. The name alone is ominous and spells potential disaster.

Well, if you’ve ever had any previous interactions with stink bugs, you’ll know from experience they aren’t all that scary. Stinky, certainly. Scary, not so much. Of course, that doesn’t mean you want them running around at free will on your property. This is the last thing any homeowner wants and here’s what you can do about it!

What Is A Stink Bug?

Your first line of defense against a creature like a stink bug is information. Learning as much and everything you possibly can about these insects. Well, at the important stuff. There is no sense in filling your head with needlessly long statistics. To start, yes, stink bugs are referred to as stink bugs because they actually stink.

It’s not like a gaseous smell or body odor. It is more like a chemical pheromone. These bugs are built with a gland, similar to that of the skunk, that allows them to emit this vapor when frightened. It’s not a vapor you’ll sell, but you’ll smell it right away. They only emit this when frightened, so as long as you keep your distance, you’ve likely nothing to worry about. However, if you go scuttling about trying to push them out of the home, you can bet they’ll start emitting.

These bugs are commonly referred to as shielded bugs because their back is brown and shaped in the same formation as a knight’s shield. When it comes right down to it, these guys are more of a nuisance than anything else. They don’t bite or transmit diseases, which is always a plus.

Now that you have a bit of a better understanding of these bugs, you’ll likely want to know how to deal with them. For starters, timing with stink bugs is crucial. The reasoning for this is that they are considered overwintering pests, meaning they hibernate. Stink bugs can’t survive in cooler climates. When the winter weather starts settling in, they start seeking warmth indoors. This is their reasoning for being in your home.

When you see them appearing in the home, they are usually trying to make their way outside to the warm weather. Typically, you won’t start seeing these invaders in the home until the warmer weather hits. That being said, it wouldn’t be entirely uncommon to spot a few of these pests in the home during the winter while the central heat is running. Sometimes the central heat can trick the invaders into thinking that the warm season is back.

Plain and simple, a stink bug is a bug that is best enjoyed at a distance. Sure, they are truly unique with their shielded backs, but you don’t want to give them any reason to spray. Your first interaction will be to either kill the bug or push them outside. This will be something you want to try to avoid. The best way in dealing with the invader is by simply vacuuming them up.

Armed with a good vacuum cleaner and the right landscaping plan, you can keep stink bugs away from your property. Stink bugs are attracted to shrubbery. It’s something they feed on, enjoy lounging around in, and will even try to hide in. Shrubbery can be nice, and it can be a great addition to the home, but it attracts unwanted invaders like you would not believe.

Therefore, doing away with it is your best course of action. You don’t necessarily need to completely eliminate it from the property entirely, but you certainly don’t want it within feet of the foundation. Not only is this a melting pot for unwanted invaders, but it provides criminals with cover should they decide to break into your windows. Simply put, keep your shrubbery, plants, flowers, and mulch at least 4 to 5 feet from your home or building’s foundation.

Know Where To Look

Stink bugs are tricky if nothing else. Think of them more as a passive-aggressive threat. When they invade the home, they typically like to bury themselves inside the walls. Although you can’t remove every section of paneling or drywall, there are other common places you can seek out stink bugs.

Keep your exhaust fans clear and clean, regularly vacuum or dust your drapes, and practice maintaining good fireplace etiquette. Do all these things and have a good vacuum cleaner with a lot of suction power, and you’ll do wonders for your ant-stink bug movement. 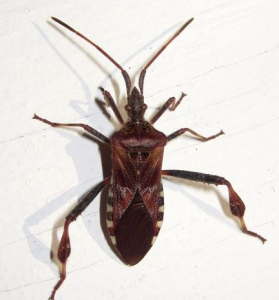