The simple mention of the wood predators known as termites can strike fear in the hearts of homeowners far and wide. When you consider that this single civilization of creatures is responsible for billions of dollars in home repairs every year, it is easy to understand why one would be frightened.

No homeowner is safe when it comes to potential infestations. Termites have proven to be one of nature’s most formidable creations. Therefore, if you want to safeguard your home and save yourself thousands in potential repairs, the best thing to do is start by learning as much as you can about the enemy.

Most people think they have a good understanding of what a termite is. It is likely that you know they are a creature that likes to eat wood. However, these creatures are not wood eaters at all. Shocking, right? That’s just one of the many things you’ll need to familiarize yourself with. To start, termites are such a problem because they are like ants or cockroaches. They are social creatures. Where there is one, there are many lingering around the corner.

Never assume just because you only see one or two there isn’t a problem. If you see one the problem is likely already so widespread that it’ll take a professional to resolve it. Because these creatures are social, they work in packs. They work as teams to establish, build, and create food, water, and shelter for their colony. Their main goal is to grow and reproduce so they can eventually send other members of the colony off to start new colonies

Although termites are believed to be wood eaters, it is the cellulose in the wood that they are after. Cellulose is also found in a wide range of other products like cardboard, cotton fibers, papers, furniture, and even trees. When you see termite mounds it means that the colony has grown so big that it cannot contain itself anymore. You can likely already imagine the problems a scenario like this would create.

Having said that, most people don’t realize they have a termite problem until it is so bad that the colony is exposing themselves because their numbers are so great. Termites burrow into wood to build complex networks of tunnels for traveling and shelter. One of the most identifiable signs of an infestation is mud tubes. While this is the case, there are other identifiers that one can always keep their eyes peeled for.

Identifying The Members Of The Colony

It was said earlier that termites are social creatures like ants and cockroaches. This is indeed true. These formidable foes even work and establish themselves in castes like ants. Every termite colony or civilization is divided into castes or levels. Each level is responsible for a specific task within the community. These tasks usually ultimately led to the development and betterment of the entire civilization.

The Queen: Most are familiar with the queen termite, similar to that of the queen bee. She is the one that the other members work to please. Being such an important member of the colony, she is also the largest, averaging at right around 4 inches in length. She usually goes so big that if she needs to be moved, it will require several hundreds of workers to rotate her. The queen’s most important role within the community is to lay eggs and she does that task rather well. A queen termite can typically produce 30,000 eggs in a single day.

The King: If there is a queen, there must be a king, right? Indeed, the termite colony also has a king, and as you likely already imagine, his task is to serve his queen. The king will continue to mate throughout the entirety of his life to grow the colony.

Worker Termites: It honestly is the worker termites that are the heart and soul of the colony. These are the members that do all the work. Although they are soft-bodied, light in color, and wingless, they are pertinent to the development of their colony. They are responsible for most of the digging and construction of the tunnels. They only grow to be about 10mm in length, but they are busy 24 hours a day. In addition to tunneling responsibilities, these members also care for the eggs, forage for food, and feed and groom other members of the colony.

Soldier Termites: As the name suggests, these are the members of the colony tasked with security. They would be the muscle-bound bouncers you see standing by the entrances and exits with their huge arms crossed over their massive torsos. In color, they are white, soft-bodied, and wingless. It is the unique construction of their heads that give them their defensive abilities. They are made with two extremely powerful jaws that can be used to fight off invading predators.

Wing Reproductive: It was mentioned earlier that the main goal of termites is to expand their colonies to the point where they can create other members to send off and start additional colonies. It is the winged reproductive members that are responsible for this task. However, that is not their only responsibility within the civilization. They also reproduce when they aren’t off creating new colonies. They developed clear, near-translucent wings that afford them the ability to fly.

Although there are thousands on top of thousands of species of termites, they are all structured with levels and castes. That being said, there are only one species that homeowners need to fear. These would be the Subterranean termites.

They are the most destructive members of the entire species, as they are the ones attracted to cellulose. This species alone is the one that accounts for nearly $2 billion in property damage yearly.

Distinguishing Between The Flying Ant And Flying Termite

It isn’t just the social aspect of the species that make the ant and termite similar. They also build and work in castes, as was described above. Along with this, they both contain flying members or members with wings. These two members are oftentimes mistakenly identified. Unfortunately, this is not a mistake any homeowner wants to make. Mistakenly identifying a flying termite for a flying ant might lead to thousands in home repairs.

Therefore, learning to identify between the two is essential. There is another advantage of spotting the flying members. As was mentioned, these are the members that are responsible for the establishment of the colony. You might be able to head the problem off before it develops into an actual infestation. However, it could also mean that the colony has grown so big they are starting over. Either way, it’s essential to be able to properly identify between the two.

The flying ant and termite both have two sets of wings. A front set and a rear set. It is the ant, however, that has longer front wings. They are longer than the rear wings and not easily broken off. On the other hand, the termite’s front and rear wings are the same length and easily broken off. This is because when they fly to and establish their colony, they shed their wings. The waist of the ant is narrow and pinched, whereas the termite’s waist is thicker and much less defined.

Both flying members also have an antenna, but it is the flying ant’s antenna that is bent like an elbow. The termite’s antenna is straight.

The best and most effective way to deal with termites is by contacting a professional. Termites build multiple colonies and complex tunneling systems. It can be hard to eliminate them entirely. Missing just one will mean the continuation of the colony. Learning to identify an infestation early is your best course of action.

That being said, our offices do offer several preventive approaches programs that we can institute. We’ll not only send out a trained investigator to scour the property and make sure you are predator-free, but we can apply a blanket chemical to ward off the establishment and development of future colonies.

You’ve likely heard a thing or two about termites. These nasty critters can turn your life upside down and ruin your property. If you don’t take care of this problem, your home is going to be in big trouble. Termites eat wood and they’ll quickly destroy your home’s structure. Suffice to say, you have to act quickly to limit the damage done. Working with us is one way to solve this problem. We strive to be one of the best Houston termite control service providers.

We offer flexible solutions that can deal with termite infestations of all sizes. Even if you’re dealing with an extreme infestation, you can rest assured knowing we’ll be here to help you. Contact us to learn more about our Houston termite control services today.

When it comes to termites, it is pertinent to act quickly. Once termites have invaded your property, you’ll have a serious problem to deal with. Termites are going to quickly ruin your home. With this in mind, you should do what you can to prevent an infestation. This is one of the most important things you could do. Using prevention techniques can make a big difference. If you’re able to prevent an infestation, you won’t have to worry about termites destroying your home.

We can help you. We can provide you with assistance and education for preventing future termite infestations.

Our Treatments Are Effective & Safe

Termites can ruin any Houston home in a matter of months. So, you cannot play games. You’ll want to find a good service provider and remedy the problem quickly. This is why you’ll want to use our treatments. We are confident that we offer the best termite removal services in Houston. We know how to stop termites from invading your property. Furthermore, we can help you get rid of termites too. If you’re dealing with a termite infestation, you’ll want to call today and learn about our services.

We’re The Best Houston Termite Exterminator For Many Reasons

Our company understands that termites are frightening. Leave them alone and they’ll turn your life upside down. We’re here to help and we’re eager to right this wrong quickly. We want to help right the wrongs of the past. Helping our customers is our primary goal. In addition to this, we offer an abundance of benefits that you’re going to love.

Ready To Get Rid Of Your Termites?

Termites are incredibly frustrating. You cannot give up because they’ll ruin your home. Our company is here to help. We offer comprehensive termite extermination services. We’re going to do everything we can to provide you with excellent service at a great price. Before termites target your home, you should call us. We’ll use preventative techniques to keep your home safe. 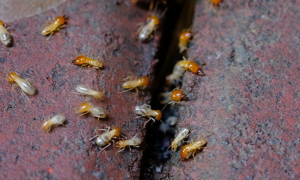